Robyn Gobbel, LCSW, wrote a blog post regarding trauma, implicit and explicit memories.  I don't know Robyn but now I'm seriously crushing on her.  Here is a link to her blog post.   Since I know most of you won't click over to read it I've asked permission from Robyn to re-post here and she graciously agreed but don't forget to go check out her blog.  So much fabulousness is waiting for you there and I am doing some serious reading on her blog. So click over.  Just do it.

Many frustrated parents regretfully feel as though all of the years that their child has spent in their safe, loving home has not made much of a positive impact on the child. This can leave parents feeling bewildered and incompetent. When I talk with parents about how their child’s behaviors are being driven by their earliest life experiences, many are overwhelmed by that idea that everything they have done to provide a safe and loving family has not helped their child let go of those earliest traumas. Despite years of “safe mom” behaviors, the child’s brain still believes “moms aren’t safe” or “moms leave.” Despite years of never going hungry, a full pantry, and never being told “no” to food, the child’s brain still believes “I’ll never get food again” or “Hungry = Starving”. Parents start to feel hopeless and helpless. When will the child FINALLY believe they are safe? Not going to go hungry? Parents feel justifiably skeptical when I attempt to convince them that their 9 year-old child’s meltdown over being told “no” to a snack right before dinner triggers the part in their brain that believes “I’ll never get food again.” How can this be possibly true when the child has not gone without food for seven years AND mom is in the middle of cooking dinner- an obvious sign that food will be plentifully available very shortly. 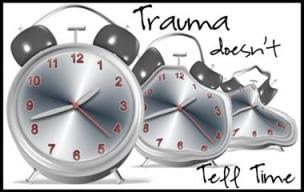 Traumatic experiences, even the earliest and preverbal traumatic experiences, remain stored in our children’s brains. The normal information processing system that stores memories in the appropriate places in our brain is thwarted by the cascade of hormones and neurochemicals that are released during a traumatic or frightening experience. The memory- along with the images, feelings, and body sensations, remain literally frozen in their nervous system.
We have two types of memories
Simply because things cannot be RECALLED doesn’t mean they are not REMEMBERED by your child’s brain and body. Implicit memory describes how all your child’s memories were stored before 18 months, and most of the memories before 3. Implicit memory includes emotions and body sensations. Your nine-year-old may not recall being left all alone as a small infant but his body REMEMBERS the fear, terror and lonliness when he was all alone, believing no one would ever come back. For experiences that happen past age 3, explicit and implicit memory is BOTH involved with experiences and events. Explicit memory is what we are usually talking about when we talk about memories. Explicit memories are recalled. It’s the image we bring into our head when we think about last Christmas or what we ate for lunch yesterday. When implicit and explicit memory work together, we smile slightly at the positive feelings the memory brings to our body, and we can create a visual image of the memory. Implicit data is stored in our limbic brain (emotion brain)- the same part of our brain responsible for fight/flight/freeze. Our body holds implicit memories even before explicit memory is working. Newborns and even fetuses have experiences encoded into implicit memories. They can’t recall those experiences but they remember them.
Explicit memory is autobiographical. This is the part of our memory that helps us be oriented to time and place. If explicit and implicit information is appropriately connected, then when you recall your favorite family Christmas at Grandma Smith’s home because you smell homemade cinnamon rolls, your brain instantly knows that Christmas is a memory- it isn’t happening RIGHT NOW. If Christmas at Grandma Smith’s house had not been fully integrated and appropriately stored in your memory processing system, you may be triggered by the sweet smell of cinnamon rolls and your body may feel as though Christmas is happening NOW.
During traumatic experiences, implicit and explicit information may not be linked appropriately. The implicit data does not connect to the explicit data. And (here’s the REALLY important part) this implicit data that isn’t connected IS NOT ALTERED BY LATER LIFE EXPERIENCES. This means that all those years in your safe home does not impact implicit information that isn’t connected to the explicit information. When an implicit memory is triggered and there is no explicit memory to help it understand time and place, your child’s body literally feels like the experience is happening RIGHT NOW.
Trauma doesn’t tell time.  When it gets triggered, it doesn’t have access to information that tells your child “Hey! That happened a long time ago! You are safe now!” Trauma seizes your child’s body in the moment and thrusts them back into those terrifying times when the trauma was happening. This happens in milliseconds.
So, trauma momma, cut yourself some slack! You are not responsible for the disconnect in your child’s implicit and explicit memories. It isn’t fair that your child’s years in your family have not impacted their implicit memories, but it’s also not your fault, or your child’s fault. The silver lining here is that it is very possible, with the right help and support, for implicit and explicit memories to get linked up and for those earliest memories to be stored in the right spot in their brain.
~

During neuro you go back every 3 months for a check-in appointment and the practitioner will re-evaluate to note any changes and to make adjustments to the protocol.  We had our first re-evaluation on April 10th.  Typically the program lasts for two years depending on how much effort you put into it and how much your child is willing/able to do.

5 hours later and we were through with both girls.  I am over-the-moon happy to report that George has completed a years worth of neuro work in this first 3 months.  The practitioner was stunned at her progress and said she had never seen it happen before.  Nicki, (George's mom) has had other friends that have noticed a huge difference in George too but hearing it from the practitioner was so affirming.  George was quick to tell Emily how much better she felt and how proud she is of the work that she has done.  She was able to verbalize that she no longer has the fear and anxiety level that she had previously and that she feels more in control of her life.  She was also excited to start on the next segment.  I don't know who was more excited, me, Emily, George or George's mom.  It would have to be a toss up.

Emily explained to George that school was no longer going to be such a challenge for her because now she'll be storing information in the correct parts of her brain.  Prior to neuro the wobbly eye movement caused George to store information in several different parts of her brain and therefore she couldn't recall things correctly.  We've already noticed this difference in other areas of her memory retention and her ability to follow 4 and 5 step directions with no problem.  Previously it was incredibly challenging for her and she would become easily frustrated when she couldn't recall information.

Today we saw George's p-doc.  Currently, George is on several different medications.  Dr. B. was so shocked at George's transformation and said if this continues she's going to start removing meds at her July appointment because it doesn't look like she's going to need them.  Her self-regulation continues to amaze all of us.

So, so, so proud of George and all of her hard work.  She is totally a rock star!