We've had so much rain that the lake was out of the banks. This doesn't happen often. Many docks were under water. We had to walk up to the floating dock instead of down the plank as normal.

At lunch time G was taking a nap on the porch up at the house. I was standing on the walkway at the dock as J walked down the steps into the lake. I was directly behind her and saw a 4 ft. snake in the water behind her. Between me and J. Oh dear lord. I'm not afraid of much but I really don't care for snakes. Snakes on land. Not so much a problem. A snake in the water between me and my child. This is not good. 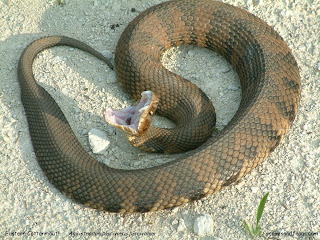 Thank goodness these days J will actually do what I say. NT practice sessions are essential to staying safe at times. There was more to this precarious situation than getting my child out of the water. I had to get her out of the water without her noticing the snake. Y'all know how hard this is with a radical kid that misses NOTHING. If she spotted the snake I would never get her back into the lake ever again.

I told her to swim to the end of the dock (away from the snake). I ran out to meet her on the dock, watching as the snake is now ON the dock between me and the way to safety. I pull her onto the dock as carefree as nothing was at all wrong. Have her sit watching the lake while I am spying on the snake. As soon as he gets into the boathouse I send J up the 150 stairs to get Daddy G up from his nap. I chase the snake through both of the boat stalls and out of the boat house onto the other side. She comes back down. Gets in the water and we repeat this whole little performance again as the snake comes back to the steps and up onto the dock AGAIN. This time he slithers onto the seawall on the far side of the boat house and I throw rocks at him. I keep throwing rocks (big rocks) for about 10 minutes.

Later we're all in the water on submersible floats. All I can think is "please, for the love of all that is holy, don't let that snake get in the float with any of us."

As soon as we got home I had to find that booger on the internet. Water moccasin (cotton mouth). The internet (and so do many of my outdoor loving friends) will argue till the cows come home that they don't live this far north. They lie. Liar, liar pants on fire.

The raised water levels must have pushed them out of their den. I'm ready for the water to recede now.

We had a snake in our yard. I don't like snakes either. One of my wild birds ( I feed all the wild birds and wild rabbits) was pecking at it to get away from us but it was striking at my bird.

So I got the van and ran it over....repeatedly.

I didn't know what to do. I had heard of getting a shovel and whacking it's head off (when the neighbors found a snake in their yard.) but there was no way I could do that.

Thankfully you guys are safe and no one got hurt.

OH NO that is so very very bad.
Brave Lisa!

YIKES!! And you handled it amazingly well, too!

I am uncomfortably squirming while reading this. ICK! I'm so glad you escaped the snake. I can't even imagine...

Oh My!!!! Yeah, that would freak me out too. Im so glad J never saw it. Im glad you all were safe. Good job!

Normally, I don't have a problem with snakes (I was raised with older brothers), but water moccasins... they are a big problem for anybody. Those things are deadly as hell!

Am I the only woman who reads this blog that doesn't mind snakes? Water Mocs are no fun, and very fast, so I definitely understand your concern, but overall I like snakes. :) I am actually psyched that my boys want to have a snake because it gives me an excuse. :)

Oh gee, that post scared me. So glad your J listened to you so well (testament to her progress!). My skin's crawling just thinking about that situation. Water moc's are nothing to mess with.

You did a great job. A poisonous snake near my kid would have made me lose my mind!!! YIKES!

Amazing how calm we can be when faced with a fear when there's a child nearby. Well done...Breathing a sigh of relief...

OK I confess that I kinda like snakes--but not a water moc! Glad it all turned out so well.

Awww, don't let everybody badmouth snakes. They are good! (and they taste just like chicken, wink!)