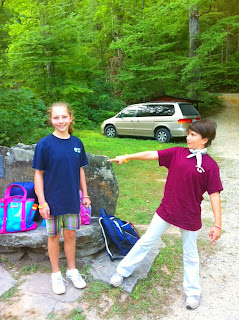 They both made it all the way through the week. *Breathing a sigh of relief*  No dreaded phone calls!  Both girls have been invited back next year and both Susan & I have been invited to their weekend mom retreat that happens pre-camp.  J was happy as a lark tonight and very proud of herself.  And she should be.  After Kara left tonight, J said, "wheweee!  I made it!"  I'm going to bottle up the memories of this week and save it for a rainy day (week...month).

Thursday morning, on the way to camp, the girls mentioned that they have a bully in their group. A 13 y/o boy was kicking and hitting several of the small children in their group including them.  So we practiced, again, asking an adult for help and how to do it respectfully.  Honestly, I wasn't worried about the girls (considering their former bully status) but was a little concerned for the other littles.  I mentioned it to the counselor that met us at drop off but told them not to worry about the girls but to coach them if they couldn't ask for help respectfully.

At pick-up the director came up to the car expressing regret about the boy's behavior and explained that they were working with him.  Quickly told her she had n.o.t.h.i.n.g. to worry about with us and told her they might be getting a dose of medicine to see what it feels like on the receiving end but that was totally o.k.

Kara decided she liked my cooking and has been eating with no problems since the previous post.  Totally forgot to have her tap and shake before she went home with her mom tonight.  Hope re-entry is pain free for Susan.

Every night at approximately 9 PM a huge, military C-130 Hercules flies over the house and skims the lake.  Unfortunately it's always too dark to get a good picture of it though I have tried many times.  Last night it arrived at 7:15 and I was totally unprepared.  But....it was really cool to see him in the daylight as it dipped over the mountains, down over our house and the lake.  The sound is loud enough to make you hit the floor and cover your head but the sight was beautiful.

Now I'm going to relax and listen to the whippoorwill sing right outside the porch.

reading your blog is like breathing fresh air.. I love to come visit here. ani

YEAH!!!!!!! That's such huge progress! Congratulations to both of you!

I've been reading your camp posts and I'm just so happy for you and J! My J didn't make it at his first camp this week; we got the dreaded call on Monday afternoon. But, you know what? I'm thrilled that he made the effort. And somehow reading about your J making it just made me smile and gave me hope!

Hi
My name is Jenna and I came across your site. J is an amazing, special precious, and an inspirational hero. She will be in my thoughts and prayers. i was born with a rare life threatening disease, and I have developmental delays, suspected autism, and behavioral issues. I love it when people sign my guestbook. www.miraclechamp.webs.com