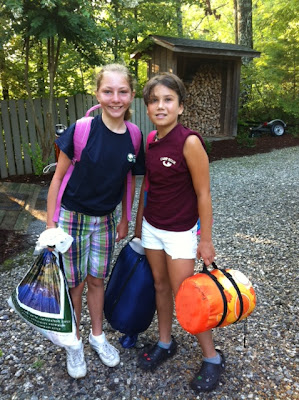 The camp mom, Claire, met me this morning at the drop off to tell me how great J did yesterday.  I did not cried on her too.  I made a trip to the Wal Mar ts and shopped at leisure.  When I made it back down the pig trail (that's a one lane road) to the lake I was blocked and could not get to the house.  They've been building a lake house  right on the road (seriously if you stick your hand out the window it will touch the house) for the past two years.  They block our driveway with about 20 trucks every day.  Normally when we're here it's no big deal since we're down at the lake while they're working but we've been having friends in and out and  they can't get by.  Now this week it's a real issue because I HAVE to leave the house at 7:50 to get her to camp on time and I HAVE to leave at 4:20 to pick her up.  I told them last week that I'd have to keep a schedule this week and gave them the times I'd be coming through and they promised to have it clear.  It's not working out so well....  I've been having to wait on them to move vehicles each time but it's been no more than 15 minutes.  This morning they made me sit and wait for 45 minutes.  They stood around and looked at me but wouldn't budge.  Mama was N.O.T. happy.

One of the trucks had to back up to our driveway because there was no where else for him to go on this dead end road.  He made a point to get out of his truck and glower at me as I went by.  Sorry dude but I didn't want to make twenty trips with groceries down a half mile road.  There is a wide spot in the road for all the trucks to park but they'd have to walk about 200 ft to get to the job site.  When I got back home I called Mountain Patrol and they agreed to come talk with them.  When Nelson (MP officer) he said he had told them again and again and he had called the homeowner to make sure they knew.  He said it had been a real problem the whole time but the next time that anyone couldn't get through they were going to call the Sheriff's Dept. to have them write tickets and if that didn't work they would shut the job site down since it's against Georgia law to block a public road.   I really hate to stir up trouble but this is getting ridiculous.  Hoping there's no retaliation down here on lonesome road but nice was just not working.  When I went out to get J this evening the road was clear for the very first time.  Yay!

Picked the girls up on time and they had another great day.  The activities were slower paced today.  Creek walking twice, arts & crafts, archery and swimming.  J did the high dive 4 times today.  She said she kept on telling herself that she COULD do it and she said it worked.  The camp mom said that neither girl was called out for a transgression and that both did great.

J: Facing her fear of the high dive even though she didn't want to.
Kara: Better table manners today.

Tomorrow's extra work:
J: Wants to be able to dive without having to talk herself into it.
Kara: Not being so bossy.

Kara suckered me in.  Sunday night I had eight different mouths to feed and she caught me at a week moment.  She told me she wanted ribs (leftovers) for dinner instead of lemon shrimp & rice.  Not wanting to cause a ruckus I gave them to her.

Tonight she sat and looked at her mini-burgers and said she didn't want them but wanted something else.  The party was over tonight.  I told her she would have to eat what we eat or not eat because I wasn't cooking two meals at each meal time.  She was m.a.d.  But she wouldn't admit to being mad, she would only admit to being sad.  Uh huh.  Right.  I had gotten both of the girls some jelly bracelets at the marts this morning and they both had them on.  Kara was so mad she tried to give her bracelets to J.   :)

I had talked with her mom earlier and she agreed no more catering.  Camp sure hasn't catered to her for the past two weeks so it's a control issue.  I assured Kara it was totally ok to be mad with me, she could tell me and I would totally understand.  J had a talk with her about it's alright to be mad but she needed to use her words and then she told her that her mom isn't a short order cook and she needed to eat what was put on the table because I was a great cook. :)

Kara wasn't buying it.  The girls did the dishes then I had Kara call and make her nightly phone call to her mother.  She wouldn't tell her mom about any of it.  By this time she was crying a little but she wouldn't admit that to her mom either.  She said she must be getting a cold.  Susan assured her that the allergy pills would help her with that and they went on to talk about her day.  Then I had Kara follow me around everywhere I went.  By the time we got to the laundry room to start the wash Kara (of her own volition) apologized about dinner.  I told her that was totally alright and that I understood.  Then I told her the story about J not eating a single bite of a.n.y.t.h.i.n.g. I put in front of her for weeks because she was testing me and wanting to control me.  I told her the good news is that J will now eat anything and tries new things all the time and has found out that there isn't much that she doesn't like.  Kara gave me a faint smile.  I told her to test me out as long as she needed to because I could be strong for her.  Then she gave me a big grin.

I do think Kara is missing her mom.  She's been away from home (except for one night) for almost 2.5 weeks.  Tomorrow night Susan is going to meet us up here when I get home with the girls.  I think that will make Kara very happy despite the fact that we are having the ever so dreadful meatloaf tomorrow night. :-)
Posted by Lisa at 8:43 PM

Is Kara RAD or is she just being a tween? I was just wondering because sometimes I have trouble separating behaviors.

Congrats on the success at camp!

Hi Cara with a C! Kara has RAD too. It's hard for me to separate the behaviors too. :( I'm hoping I get up to speed soon but I'm a slow learner so I expect it to take me a while. :)

Overcoming a fear like diving off the high dive is a really big deal, and definitely not easy. In gymnastics it is common to teach kids to use verbal cues (talk to themselves) to stay focused and deal with fear.

I think you handled dinner dilemma well. My non-RAD (just turned) 13 year old has been turning her nose up at just about everything I have cooked for a couple of weeks now. I am not a short order cook either, she can eat what I put in front of her or she can make herself a PB&J and sit at the table until every one else is done eating. (I would let her go without but obviously, I still have some issues and the thought of not feeding my kid is something I can't deal with and I am sure she knows it) But man oh, man am I tired of it!

Wow... 2.5 weeks away from mom at that age and no total meltdowns? I am in awe at how well you're keeping it all together!

Wow, sounds like Miss J is doing wonderful- yay for her and you, proud Mama!

Wow! You are SO good at what you do! I loved the line about being strong for her. I am storing that one away for use when the time comes (which it of course will!). Great job handling Kara's attempts to over-control. I'm sure she's relieved (secretly). Can't wait to here how it went for her to see her mom. That has to be a struggle trusting that she will actually get back together with her mom.

I have a lot of goals but the high dive is not now, nor has it ever been one of them.