For All My LDS Friends 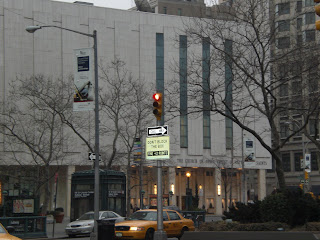 The picture above is the LDS Temple on Broadway in NYC which was a part of our view from our room. I meant to post this last week and totally forgot.
I also forgot to tell you about the little disruption in service Sunday afternoon and yesterday. As we were coming in the door at the lake, J slammed the door. I had her go back to practice shutting the door and Puddin came bounding through the house headed for the porch. I was standing right beside J when she looked at me (it was just a glimpse that you just know) at the same time she shut the door on Puddin. It was fleeting and then she caught herself and pulled the door back. I went after Puddin first to make sure she was ok and sent J to her room. Checked Puddin then went back in the house to talk to J. She was bawling and G was in her room. He said, "she didn't do it on purpose, she's sorry, ease up on her." I knew this was not going to be good. Told J to start packing and G followed me out of her room telling me how mean I was to her. Hmmmmm.....bad decision. I knew J could hear him. He repeated it 4 or 5 times which of course made me madder by the minute. I replied calmly several times and the last one I yelled that I knew what I was doing. He stormed out and J & I packed the car.
I didn't discuss it all the way home because I needed to get my thoughts together. I was going back over it again and again and trying to analyze the situation. Second guessing myself all the way but my gut knew. I just knew. When we got home I pulled J in my lap and asked her what happened. She was sobbing saying she didn't know. I told her I thought I knew what happened and explained that I thought that she was very, very mad and the old her wanted to hurt Puddin but the new J caught herself before it got bad. She agreed sobbing and made the sweetest apology to Puddin to which Puddin licked her face up one side and down the other. Then I told her that she was trying again to make G mad at me and she agreed with that too and said it was because she was still mad. G appeared a few minutes later and J told him exactly what happened and apologized for her behavior. I apologized for mine. Somehow he never apologized to me. I knew he was sorry but it sure would be nice if he would model an appropriate apology for J. Oh well....
Yesterday, at lunch, she got mad and put the dishes in the sink very hard. All while looking at me. I can't believe they didn't break. I let it go at the time. When dinner time came I cooked her dinner and put it on a paper plate. I didn't eat. After she finished and the kitchen was cleaned up I sent her to go get dressed and jump in the car. After we were both in the car I told her that she was going to buy me dinner at the Thai restaurant to make up for being mean to the dishes. She was not happy about that. I made a huge point of telling her that it was so sweet of her to take me out to dinner. Hardest meal I've ever had to eat. When it was time to pay and J was handing over her money, I made a really big deal telling Valentine that I had the most awesome daughter in the world because she took me out to dinner. Valentine thought that was so sweet. I got to brag on my kid even though it was a consequence. You should have seen her chest puff out and the grin on her face. The sweetest thing! The bonus: today she was so gentle with the dishes. Maybe the meal that I choked down was worth it. Yay!
Thank to the brilliance of Foster Abba I've now set up an email group to email all of you when there's a post on the other blog. It'll be coming from the gratefulhouse @ gmail dot com so be looking for it.
Posted by Lisa at 7:58 PM

Have I told you recently how awesome you are?? How do you think of these things? Brilliant, having her buy your dinner and then making her feel good about it! And sweet, forgiving Puddin. Please give her a big smooch for me!

As for G, I guess old habits die hard. It's too bad he can't be more supportive, especially once SK arrives. Who knows, maybe he'll surprise you when he meets her and then realizes how far J has come despite your refusal to "ease up on her."

Ditto on the awesome! You are absolutely brilliant and you handled that so well! I just teased you a bit(in a nice way) on my recent post becaust I finally got my copy of the GI book and it really is wonderful. I hope you don't mind. I will start taping this weekend.

I know how hard it is to not have the unconditional support of important people in your life at those critical moments. Some people are just "slow learners" even when the evidence is right before them. Just remember, your Serenity Trip is right around the corner.....

I've been to that temple. It's so awesome that it's right there, in the middle of the city. Thanks for posting it!

And you never cease to amaze me with your fabulous parenting skills.

Tracey said exactly what I was going to write. How do you think of these things to do! So brilliant. Having to deal with a "secong child" G doesn't help any. I'm glad you were able to stick to your plan. Big Rah-Rah for Lisa!!

I saw that temple when we had an 8 hour layover in NYC. I'd love to get back there someday.

I think it's great that you stuck to your guns and went home after the attempted Puddin smashing. That is one thing I HAVE to work on. I give punishments to my kids, but am not always the best at following through. Then I wonder why they think they can get away with anything.

You amaze me. You are such an awesome mom!

I had totally forgotten about the NY temple being "just" another building. Very different than what most LDS people are used to, yet beautiful in its own way. You were so sweet to think of your LDS friends and take that pic.
Poor J, that radish just surprises her sometimes, the nastiness creeps up on her, and before she realizes it, it has sabatoged her again. Good for both of you for realizing what was going on.

Yup, I agree with everyone else. Trust your instincts, you have the results to show for it.

Dancing on the Edge said...

The dinner was a fabulous idea! You are an awesome Mom, and J knows it!!!

The thing is, you can't ease up, because if you do, then the bad behavior just comes back all over again.

Next time you want her to buy dinner, send me in your stead. I can manage to "choke down" Thai food even on a bad day.

I know this sounds terrible, but you really should learn to enjoy your children's consequences. I know I'd rather have good behavior, but if I can't have that, I might as well enjoy the consequence.

But I will remember "make the kid buy me dinner" as a consequence. I know that's one I'll enjoy a great deal.

I sometimes warn Jupiter with the consequence of using her dollars to replace something of the family's that she has deliberately chosen to waste (soap, shampoo, kleenex, and pull ups.) I haven't had to do more than warn yet...but I'm sure I will one of these days.

Thanks for thinking of us and sharing your picture! That was very sweet of you.

Keep up the good work. You're doing great. Thanks for sharing your journey, too.

You are too creative for words. I need to bottle you.

I'm going to check into the other one today ( although I'll be under a weird name) - I didn't even see my invitation until this Monday night!